Rosh Hashanah (also spelled Rosh Hashana) occurs at sunset on Sunday, September 25 and ends on sunset on Tuesday, September 27, 2022. It is a celebration of the Jewish New Year in the Hebrew calendar, a time to rejoice the prior year, an opportunity for remembrance, self-reflection, and introspection, and a time of penitence for any sins committed in the prior year. It is a religious holiday rather than a secular one though each individual will have their unique family traditions along with prayer and religious observances. It is the start of a 10-day period referred to as the High Holy Days (also called Yamim Nora’im or Days of Awe) ending with Yom Kippur at sunset on September 16. 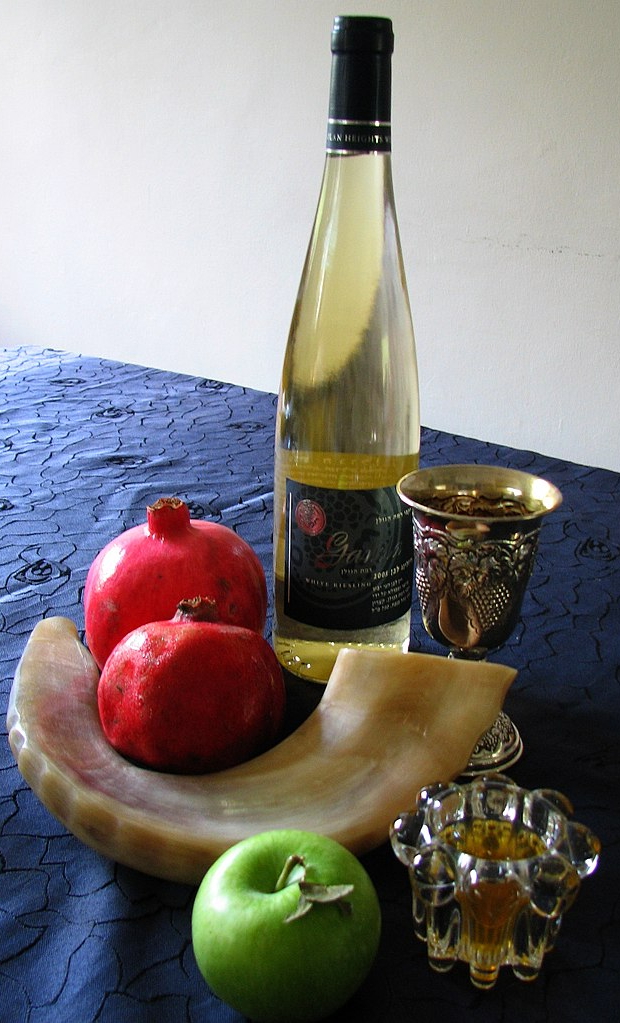 The literal translation of Rosh Hashanah is “head of the year”. As with many traditions and celebrations that occurred millennium ago, Rosh Hashanah is tied to the agricultural seasons. Other Middle Eastern cultures have celebrations in spring as well as in fall aligning with either sowing seeds or harvesting the bounty. Yom Teruah (“raise a noise”) as noted in the Torah has (probably) been intermixed and augmented with the Babylonian New Year’s traditions to form the basis of Rosh Hashanah.

Rosh Hashanah includes time spent in prayer at the synagogue, family gatherings, the sharing of traditional foods, and other activities. One of the most prominent observances is the sounding of the shofar, a cleared-out ram’s horn which when blown makes a loud trumpet-like sound. The early morning prayers are augmented with three additional sets of prayers followed by the sounding of the shofar. One of the stories read from the Torah (a.k.a., the first five books of the Old Testament) during Rosh Hashanah is the Binding of Issac which highlights the covenant between the people of Israel and G-d. After the first Torah readings and prayers the shofar is blown 30 times, and after the additional services and prayers, the shofar is blown another 70 times. The shofar is blown in three different manners: tekiah for one long blast; shevarim for three short shofar sounds, and teruah that involves at least nine blasts on the shofar. The tekiah gedolah (great tekiah) is again one long blast but it is an extended blast. (Listen on YouTube for the three types of shofar blasts.)

As mentioned, this is a time of self-reflection, repentance (teshuva) and atonement for individual sins committed. One traditional ceremony on the first afternoon of Rosh Hashanah is called Tashlich whereby people throw into flowing waters crumbs or pieces of bread symbolizing their sins. In so doing, their individual sins are cast away eliciting the verse “You will cast all our sins into the depths of the sea” (Micha 7:19). As noted in the Talmud (the primary source of Jewish religious law and theology), during Rosh Hashanah, three books of account are opened: One for the “righteous” people, one for the “wicked” people, and one for those in between with both good and bad deeds (see Sefaria, My Jewish Learning, Wikipedia).

“Three books are opened on Rosh HaShana before the Holy One, Blessed be He: One of wholly wicked people, and one of wholly righteous people, and one of middling people whose good and bad deeds are equally balanced. Wholly righteous people are immediately written and sealed for life; wholly wicked people are immediately written and sealed for death; and middling people are left with their judgment suspended from Rosh HaShana until Yom Kippur, their fate remaining undecided. If they merit, through the good deeds and mitzvot that they perform during this period, they are written for life; if they do not so merit, they are written for death.” (Sefaria: Talmud: Rosh Hashanah: 16b)

The notion of a book opening and a book closing aligns closely with the ending and beginning of a new year (and that our actions have consequences as do our sins). Hence, those who fall “in between” can repent and atone for these sins during the High Holy Days through good deeds and mitzvot (commandments and customs) to then be placed in the Book of Life.

As with most Jewish celebrations (and most other religions’ holidays in general), certain foods are associated with the individual holiday’s traditions. For instance, applies dipped in honey are traditionally consumed on the first night with the honey used to sweeten the apples and to symbolically create a sweet new year. As the apples are picked up, the ha’eitz blessing is said followed by “May it be Your will to renew for us a good and sweet year.”
(Image: Fort Tyron Jewish Center Premier Apple and Honey Tasting Event!)

Couscous with seven vegetables is another traditional food. In one recipe the seven vegetables include tomatoes, red peppers, zucchini, turnips, carrots, squash, and chickpeas along with a large number of herbs and spices (cumin, paprika, ginger, cinnamon, cayenne, ras el hanout, and parsley). The significance of the number seven is that it is often considered a lucky number, and there are many biblical references including the world being creating in seven days, seven blessings in Jewish weddings, etc. 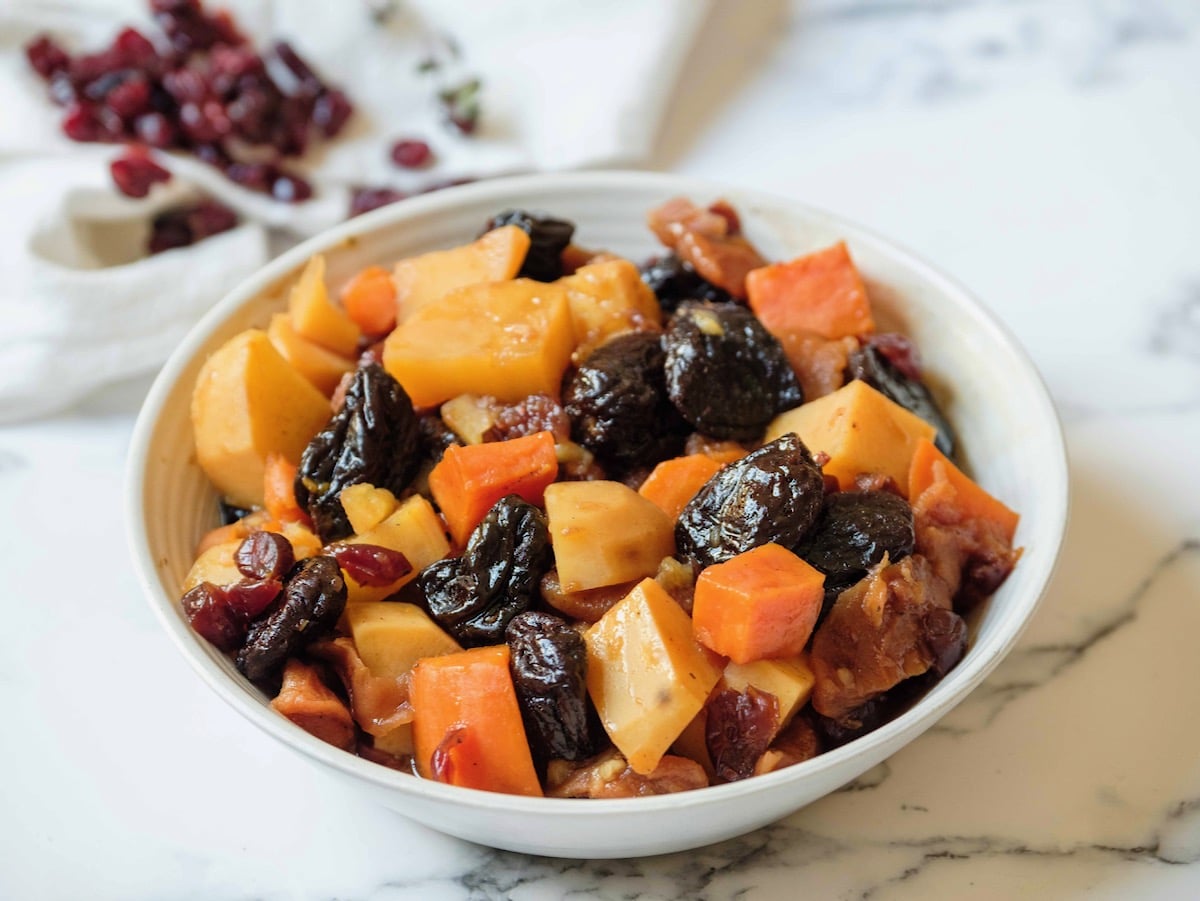 Tzimmes, another traditional food, is a stew made from carrots and dried fruits such as prunes, raisins, cranberries, or dried apples, and sweet root vegetables like sweet potatoes or yams. The Yiddish name for carrots is merren which means “carrot” as well as “increase”; hence, a dish with carrots can signify a bountiful year. (Recipe to prepare tzimmes. Image: by Tori Avey “Stovetop Tzimmes”)
Other symbolic foods included in meals are dates, black-eyed peas, leeks, gourds, pumpkin-filled pastries called rodanchas and stuff vegetables called legumbres yaprakes. Often on the second night of Rosh Hashanah a new fruit is eaten to permit the she’he’cheyanu blessing. Since a common food theme for Rosh Hashanah is “sweet” to prepare for a sweet year to come, foods that are vinegar-based, bitter, or tart such as horseradish are typically avoided during the celebration to prevent a bitter year. 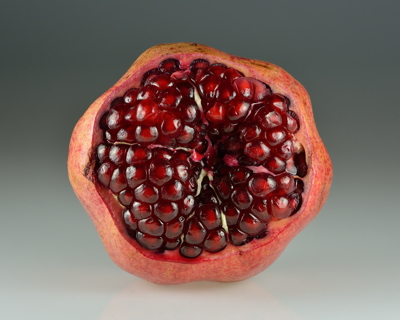 Pomegranates have deep cultural and religious significance in many religions and can be symbolic for fertility or fruitfulness owing to the large number of seeds found in the fruit. In fact its symbolism is noted in the Christian, Muslim, and Buddhist religions as well as with the ancients Greeks and Persians.
(Image: by Ivar Leidus, Pomegranate, CC BY-SA 4.0, via Wikimedia Commons)

Finally, though not a food item, another important tradition in many Jewish celebrations is the lighting of candles at a specific time near sunset. This is done for Rosh Hashanah by the women and girls of the household.