Eid al-Adha (a.k.a., Eid ul Adha, and written عيد الأضحى in Arabic, عید قربان in Persian, and อีดิ้ลอัฎฮา in Thai) occurs on the 10th day of the 12th lunar month (a.k.a., Dhu al-Hijjah), and on the Gregorian calendar for 2022 it occurs at sundown on Saturday, July 9 and lasts between two and four days depending on the country celebrating the holiday. It is the Feast of the Sacrifice for Muslims, and is sometimes referred to as the “Greater Eid” (Eid meaning celebration, and Eid al-Adha being a greater Eid than Eid al-Fitr), and is a time for prayers at the mosque, to connect with family and extended family as well as friends and neighbors, and also a time to provide charity to those in need. The holiday also is significant because it occurs at the apex of the Hajj (pilgrimage to Mecca which is one of the five pillars of the Muslim faith).

It is a holiday that recognizes the sacrifice Ibraham (a.k.a., Abraham) was willing to make to G-d. In dreams, Ibraham was commanded by G-d to sacrifice his son Ishmael (a.k.a., Isma’il or Ismail) as an act of faith and obedience. Ibraham’s family tried to dissuade him from carrying out this commandment. In addition, Satan (a.k.a., Shavtaan) also tried to intervene and convince Ibraham to disobey G-d. Instead, Ibraham threw pebbles at Satan to drive him away — a tradition still followed during the Hajj to drive away evil. As Ibraham was getting ready to sacrifice his son, G-d sent the Angel Jibreel (a.k.a., Gabriel) to intervene and provided Ibraham with a lamb (sometimes also listed as a ram) to sacrifice instead of his son as this was a test to see if Ibraham would be obedient and follow G-d’s commandments. This biblical story is also recognized in Genesis in the Old Testament and in the Torah in the Christian and Jewish faiths, respectively, though in these versions Issac, Ishmael’s half-brother, is instead to be sacrificed by his father. 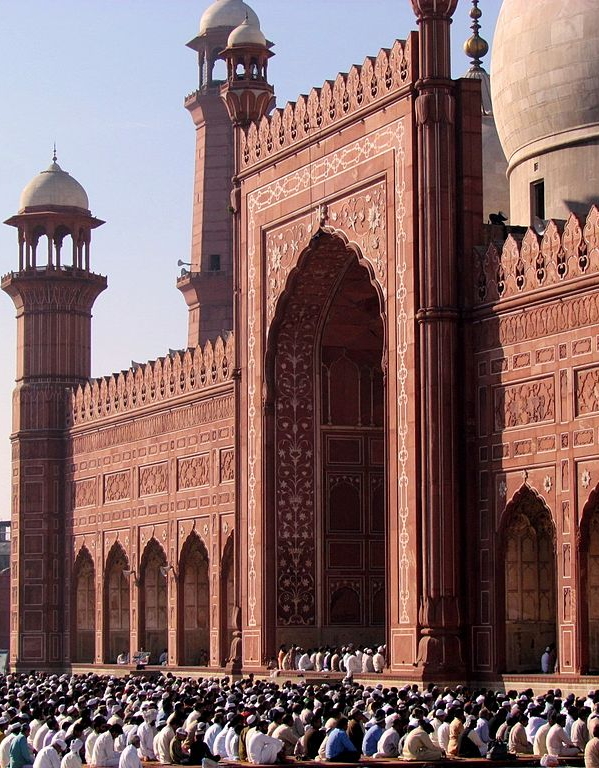 The celebration involves the religious sacrifice of an animal such as a goat, cow, sheep, or ram (Qurbani) and dividing the meat into thirds. One third is for the family to celebrate the Feast of the Sacrifice, another third of the meat is given to extended family and friends, while the last third is for the poor and needy to make sure they too get to enjoy the celebration. Hence, a major theme is to be charitable, express kindness, and equality so all can participate in the celebration. Other forms of charitable giving are permitted without the religious animal sacrifice such as devoting one’s time or providing money to those in need.

Other Eid al-Adha traditions include men attending prayer services with a special prayer given (Eid Salaah) with women attending depending on the specific community. Following the sermon and prayers, the attendees embrace, may exchange gifts, and greet one another (“Eid Mubarak” which translates to “blessed feast”, “blessed celebration”, or simply “happy Eid”). Men, women and children are expected to dress in their finest clothing, many schools and places of work are closed, special foods are prepared, and family or community gatherings are held. It is also a time to reflect on one’s faith and to further understand Islam and the Muslim traditions.

As with most religious celebrations, there are traditional foods associated with each holiday’s traditions. Since the Muslim faith is present and dominant in a wide range of countries including northern Africa (e.g., Mauritania, Algeria, Libya, Egypt, Chad, Sudan, etc.), the Middle East (e.g., Saudi Arabia, Iraq, Syria, Iran, etc.), southeastern Europe (e.g., Turkey, Serbia, Herzegovina, Albania, etc.), southwestern Asia (e.g., Pakistan, Bangladesh, Turkmenistan, Afghanistan, etc.), and countries bordering Oceania (e.g., Indonesia and Malaysia), there are many culturally-specific foods along with a wide range of foods served during Eid al-Adha feasts. Even though there are many variations, most prepared foods revolve around meat dishes aligning with the tradition of slaughtering an animal for the feast. 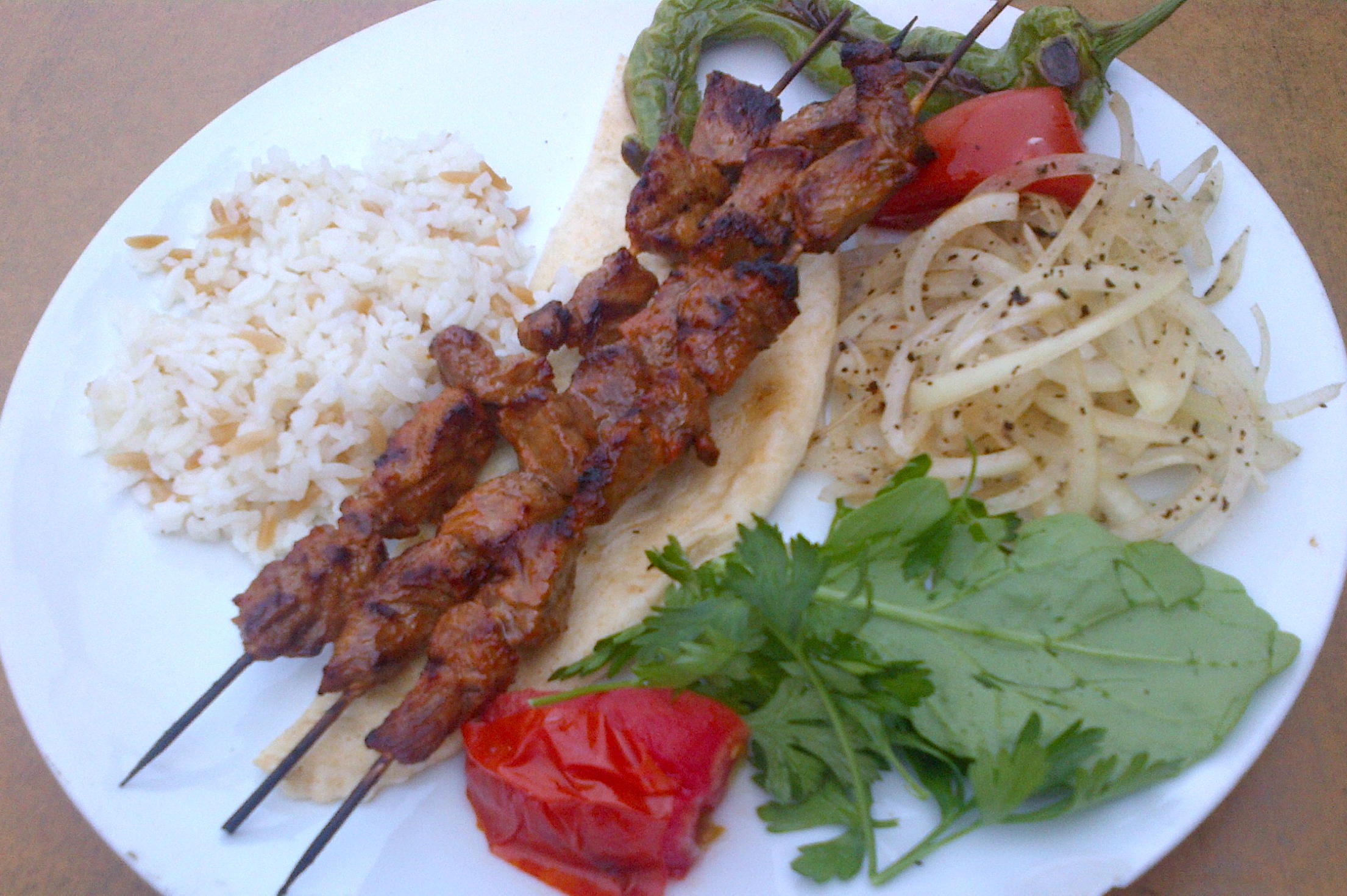 (Image by E4024 via Wikimedia CC BY-SA 4.0)
For example, there are many meat dishes served during Eid al-Adha including kebabs, haleem, korma, and tajine. Kebabs are a traditional Middle Eastern cuisine though many variations around the world exist. The traditional form of a kebab includes chunks of meat or ground meat along with onions and other vegetables often placed on a skewar and grilled though some recipes have the meats cooked in a pan. The common meats include beef, chicken, lamb, goat or fish. This kabab recipe (YouTube (7:45), by Food Chella, June 11, 2021) to make Koobideh Kabobs from grilled minced meat, calls for a beef and lamb mixture, spiced with onions, garlic, cloves, sumac, and tumeric, and served with grilled tomatoes, peppers, serverd over saffron rice.

(Image by Izzah from the Best Authentic Chicken Korma recipe) 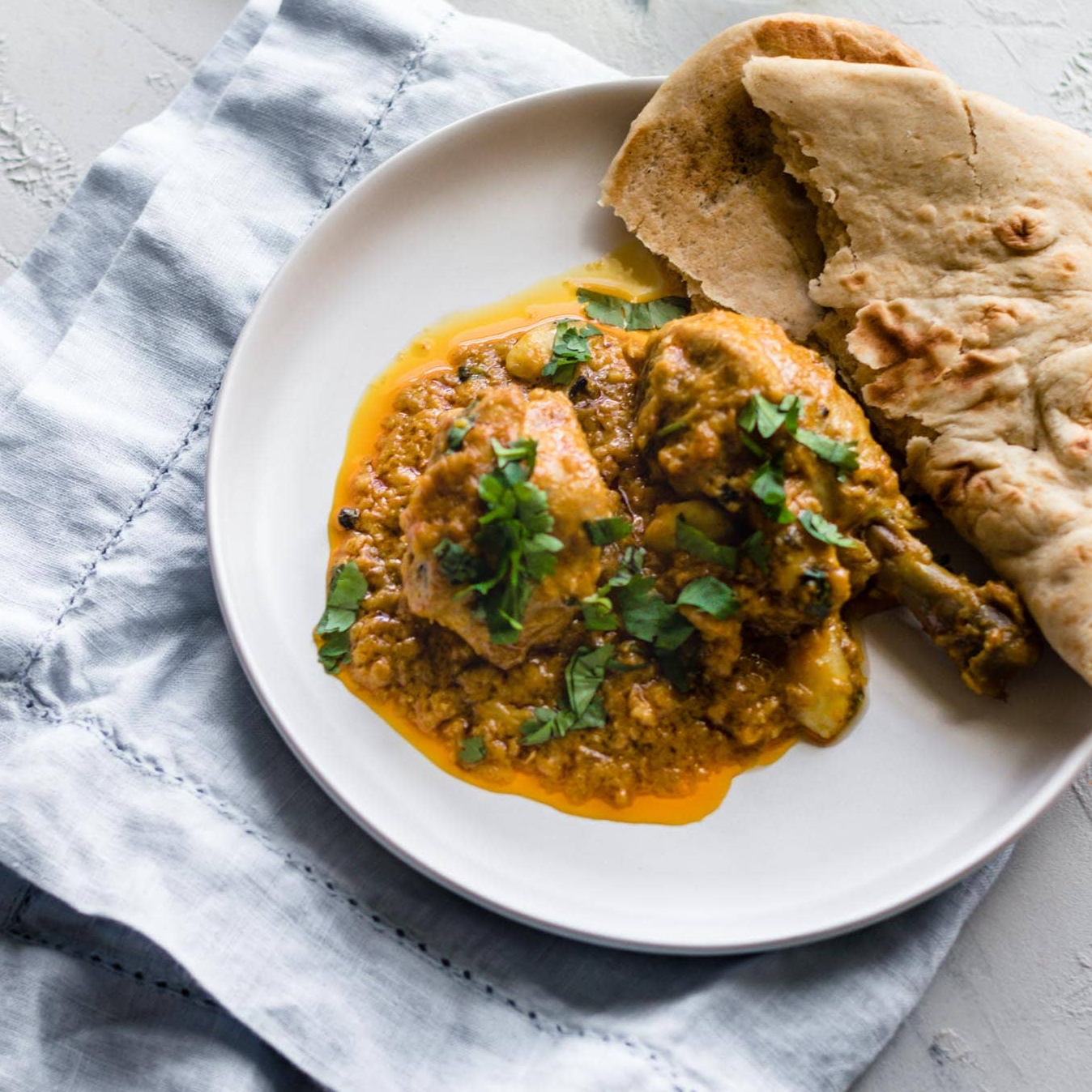 Korma is an Indian-derived dish typically made with meat (e.g., lamb, beef, or chicken) or vegetables with a cream-based sauce. Typical spices include coriander and cumen, and it can be served spicy or mild. In this korma recipe (Tea for Turmeric, by Izzah, The Best Authentic Chicken Korma), the chicken is pan-seared, spiced with onions, bay leaves, cumin seeds, and peppercorns, along with cloves, cinnamon, garlic ginger, coriander and cumin and served with a yogurt-based sauce. The dish looks wonderful! 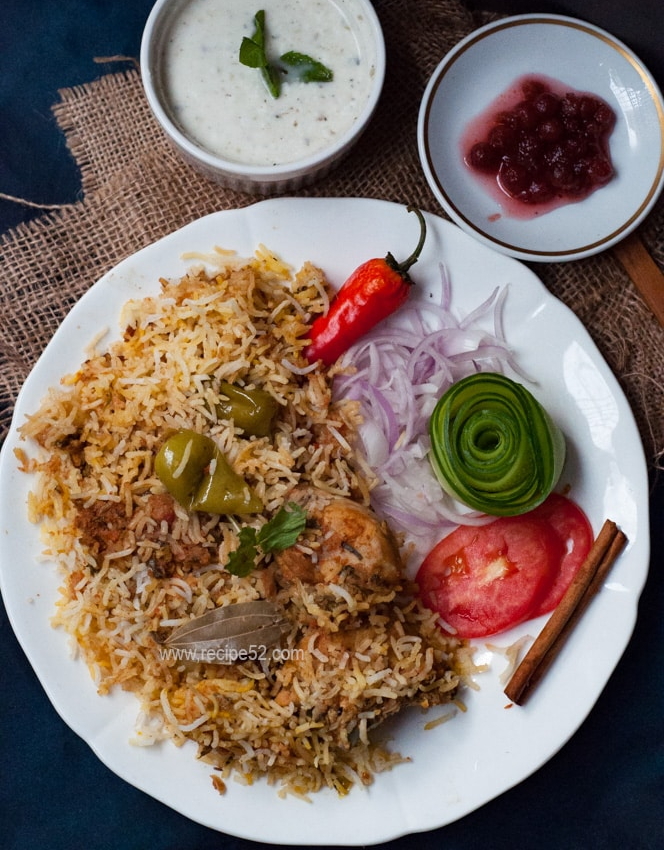 Other common foods served during the festivities include haleem which is a stew containing meats and lentils and is found throughout the Muslim world again with variations in meats and accoutrements. One haleem recipe by Roxana Begum can be found at the Delicious Crescent and is described as being between a stew and a soup. Pilaf or pilau is a rice-based dish again served with vegetables and meat with added onions and spices (e.g., cardamom, bay leaves, and cinnamon). This rice pilaf recipe (The Mediterranean Dish, by Suzy Karadsheh, Middle Eastern Rice Pilaf with Peas and Carrots), is a basmati rice peas, and carrots. Biryani is a southern Asian-based rice dish commonly served during the Eid meals. This biryani recipe (Recipe 52, by Mariam Sodawater, Pakistani Chicken Biryani Recipe with Tips), is a yogurt and spiced marinated chicken served with basmati rice and potatoes.
(Image by Mariam Sodawater from Pakastani Chicken Biryani recipe; June 5, 2020)